skip to main | skip to sidebar

It's been a while since my last post, here we go.

Took my 2001 Jetta TDI over to a fellow Veggie Jetta TDI driver to have the intake manifold and exhaust gas recirculation control valve cleaned after another 100,000km. I did this before, so here are some of today's photos.

What came out of mine using scrapers and steel brushes: 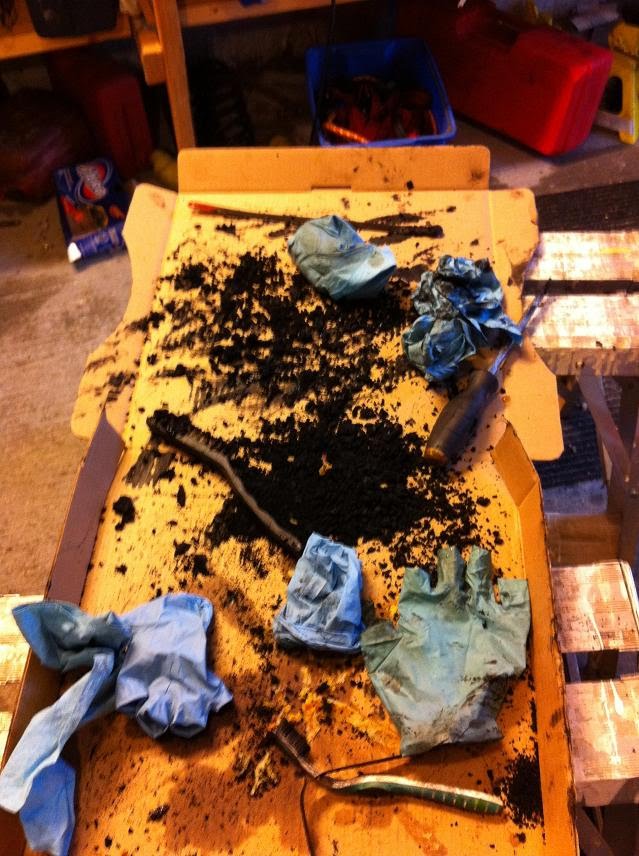 Upclose, the stuff is so black, the previous photo couldn't Auto White Balance to pick up the detail: 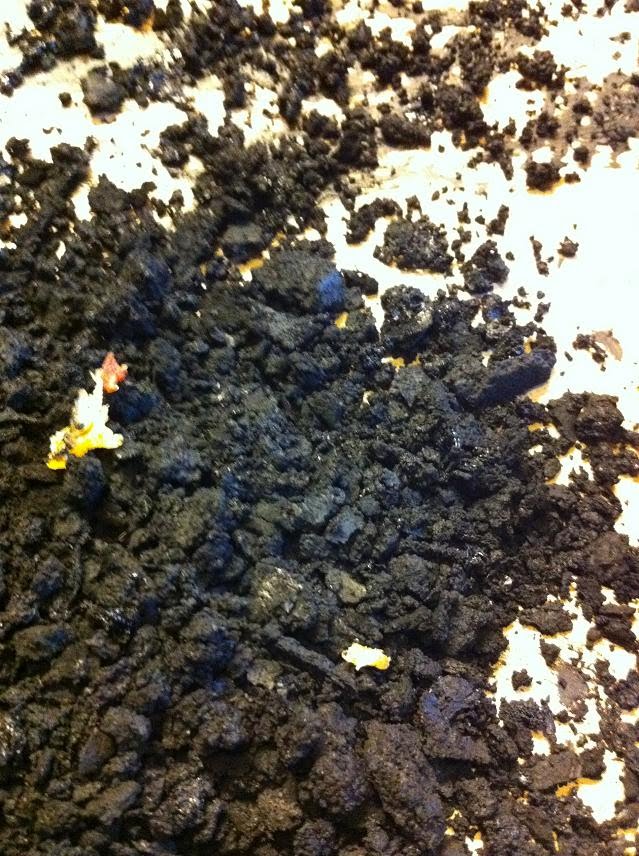 Even after that mess and some time in the solvent station, we could feel with our nitrile covered fingers there was some build up left. So we took a propane torch and some compressed air and ...

Yup, that did it.

Performance of the car is now a lot better, and I'm sure better efficiency. I'll update the fuel effciancy graphs in the top-left of this blog after our next refill (2-3 weeks from now).
Posted by ... Smells Like Fries at 11:59 No comments:

Question: What's the big deal with the fight between Carbon-Tax and Cap-and-Trade?

Convincing voters to pay "yet another tax" will hurt your chances of getting re-elected. But if you obscure the new cost in a financial construct, tax payers will (initially) blame business for increasing costs.

Don't be fooled, both systems will raise costs!

Under a cap-and-trade model, a central authority (a government) issues emissions licences uniformly to a sub-set of emitters at the start of a term. At the end of the term, they require these emitters to own licenses matching their output for the term. If they do not, a penalty is incurred. Picture a game of musical chairs if you will.
1) How will the government prove an emitter produced 10 tonnes of CO2 and not 5?
2) How many civil servants will be employed to audit these emitters?
3) How will this model scale from the initially small sub-set of emitters to the planned totality of the economy?

A Carbon-tax model is easy to enforce and audit as well as having the benefit of not exacerbating price shocks (explained below). Tax all sources of emissions (coal, natural gas, gasoline, diesel, etc) and no auditing is required.

It's a mentality of top-down vs. bottom-up.

The most important difference lies in financial implementation.

The free market is designed to buy and sell goods and products. Tangibles like stocks, precious metals, and frozen concentrated orange juice are amendable to securitization. Constructs like mortgage securities, collateralized debt obligations and emissions caps are the antithesis of a product. They are the lack of product.

In recent years, the world has learned that when you separate an obligation from the party who made that commitment through securitization, unforeseen consequences are inevitable (e.g. global financial crisis, illustration).

We are on track to repeat the mistakes of the U.S. financial system in our attempts to foster a new industrial economy built around environmental efficiencies.

Due to the psychological nature of trading price shocks are inevitable - cost certainty is needed for economic stability. More importantly, a cap-and-trade model can cause some high polluting producer produce goods at a lower cost than comparative low polluting producers.

A simple example would compare two farmers in California and Southern Ontario selling produce to Southern Ontario. The Californian farmer uses solar panels to run irrigation pumps, and can sell their emissions cap to the farmer in Ontario who does not have solar cells. The fact the produce is grown in an desert irrigated using power from solar panels (which were made using coal power stations in China and shipped 10,000km), and then shipped 3,000km to Ontario is not accounted for.

A contrived example, but it demonstrates what happens when the source of carbon emissions (the fuel) isn't used as the basis for emissions control.

All governments are investigating some kind of emissions control regime. Let us not repeat the obligation securitization mistakes of high-finance in the green economy we are all looking to bring us out of this mess.
Posted by ... Smells Like Fries at 06:44 1 comment:

Like it or not, in Canada we use nuclear power (mostly in Ontario). This source of electrical power has a nasty side-effect: waste from the reactor is possibly the most toxic substance known to man.

The cost of stewardship of this waste grows proportionally with the amount of waste produced. The more nuclear power we consume, the more waste we have to take care of for the coming centuries.

It would be nice if we could just turn the 'nukes' off and cut our losses. But our need for electricity isn't dropping. When talk about electric cars, we need to be honest and realize we're talking about moving our demand for gasoline to a demand for electricity. We will need 3,000 giant wind turbines or PV solar fields for every 1 nuclear reactor - and they will not produce reliable sustained power needed for our businesses and society.

As of this post, the price of Uranium is $65 USD/lb, about the same price as silver. This represents about 10% of the life-time cost of a reactor. This doesn't include the centuries of waste fuel management.

Waste fuel from American, Russian, British, and Japanese reactors only need to be cut into shape for a CANDU - even easier.

Now that there is enough waste fuel in Canada (and the world) to justify construction, isn't it time to consider a waste-fuel processing plant to reduce our mining of uranium? With technology like that, Canada can become a nuclear powerhouse helping countries reduce production nuclear waste. This will create high paying Canadian jobs in a growing sector of the world economy.
Posted by ... Smells Like Fries at 05:38 No comments:

Check out the links on the left "Graphs 2009-05-08" for new charts showing fuel consuption of our car as well as electrical consuption for the winter with our new Ground Source Heat Pump furnace.

Natural gas consumption has been zero for a while, the gas company come over a put a lock bolt on our meter. No gas bills.
Posted by ... Smells Like Fries at 09:08 No comments:

Looking at my Ontario Generation Charts, you can see that as of April 19-20 2008 the amount of nuclear power produced in Ontario has reduced, likely seasonally based on 2008 behaviour.

However, as of that date - the entire Darlington generation site is generating zero MW or power on all 4 of it's 1GW generators. This did not happen in 2008.

Very surprising. I can find not mention on www.ieso.ca or on the net for why this happened. Anyone know?
Posted by ... Smells Like Fries at 08:59 2 comments:

The CBC's excellent radio show Quirks and Quarks had a guest who wrote a book "Physics for Presidents" and it got people in a bit of a tizzy. Listen to it in MP3 or OGG.

So much was the reaction, the host Bob MacDonald wrote about it in his blog.

Read it, then check the responses from people. My favourite:

Dave from Ottawa
"A kilogram of coal, on the other hand, contains about 1,000 times more energy than an equivalent volume of air blowing past a windmill."
Now subtract the energy it took to extract and transport that coal to the power plant.
My point is that energy density is a misleading measure. Update the article to compare net energy output of the sources.

My comment to Dave from Ottawa:
Now substract the energy it took to mine the iron, refine it into steel, bend and melt it into a turbine and alternator and transport it from Europe to Ontario. My point is that energy density is not the only measure but the single more leading indicator of a fuel's viability.

I repeat my theorem:
For an energy source to be viable, it must be produced from raw materials using only that fuel source.

This test passes for coal, natural gas, petroleum, and nuclear power. It does not (yet?) pass for wind, solar, hydrogen, or ethanol. Biodiesel is on the fence.
Posted by ... Smells Like Fries at 08:19 No comments:

Like this blog, I am here to present facts and explain them. In short - the public data shows no less Coal or Natural Gas was burned during Earth Hour. And yes, the Nuclear plants were still going full-tilt (in fact the Bruce-B Generator-5 increased production prior to the event).

It's great to "do our part" and not consume electricity. But we need to realize that less consumption does not always result in less pollution.

Sounds like anti-Earth propaganda doesn't it? Let me explain by using Earth Hour as an example.

The notion is if we turn off our lights and use less electricity, we make less pollution. Forget for a second that florescent lights in office buildings are much more efficient than the soft glow of incandescent lights typically in homes. And forget that lighting is a very small portion of the total electrical demand.

Think of how the electricity is generated. In Ontario there are 5 major fuel types being used for generation:
The Independent Electrical System Operator announced that during Earth Hour Ontario electrical demand dropped by 6% from the calculated expected demand.

Put yourself in IESO's shoes - you control the leavers that can crank up the generators.

The irony is the fuel source perceived to be the cleanest - Hydro - is what gets turned off during Earth Hour because it's the only thing that can be turned on again as demand returns at the end of Earth Hour.

The graphs of the data provided by the IESO generators support this conclusion.

What would make IESO turn down the real polluters of its generation system? If Earth Hour was an all-day event.
Posted by ... Smells Like Fries at 03:18 No comments:

As I've said before in my blog, algae as biofuel is attractive.

Here's a proof of concept (shown on History Channel) that is using transparent tubes as bio-reactors collecting waste gas from a 1GW power station. It claims that 100% capture from the power station will need 2,000 acres of land or 8 square kilometers (2km x 4km).

The University of Kentucky is making making headlines on this. It's not new, but this is the direction we need to go in considering the 100-fold increase in photosynthetic performance.
Posted by ... Smells Like Fries at 16:27 No comments:

Last night it dipped down to -20C, the furnace was running quite a bit in the afternoon so I took this chance to turn off the electricity to our electrical hot water tank and let the furnace heat our hot water. 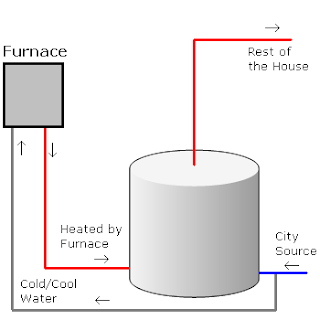 Here you see how the tank is hooked up to the furnace. As you can see, the hot water comes out the top of the tank (since heat rises). The furnace draws from the bottom, and returns to the bottom on the other side.

Once the power was turned off to the tank we ran the dish washer, did a sink full of dishes and our daughter had her bath.
Posted by ... Smells Like Fries at 06:28 No comments: